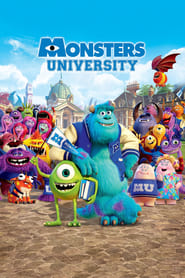 IMDb: 7.2 2013 104 min
A look at the relationship between Mike and Sulley during their days at Monsters University — when they weren’t necessarily the best of friends.
AnimationFamily

IMDb: 8.2 2010 103 min
Woody, Buzz, and the rest of Andy’s toys haven’t been played with in years. With Andy about to go to college, the gang find ...
AnimationComedyFamily

IMDb: 8.2 2009 96 min
Carl Fredricksen spent his entire life dreaming of exploring the globe and experiencing life to its fullest. But at age 78, life seems to have ...
AdventureAnimationComedyFamily

IMDb: 8.4 2008 98 min
WALL·E is the last robot left on an Earth that has been overrun with garbage and all humans have fled to outer space. For 700 years he has ...
AnimationFamilyScience Fiction